An exploration in speculative design.

A reflection at the beginning of a case study – weird, right? This unconventional project called for an unconventional case study, because it was unlike anything I had ever worked on before. It was strange and frustratingly difficult to be a critical designer. However, it pushed me to think in new ways, and it was freeing to get away from “regular” UX work.

Now more than ever, the ethical dilemmas of data privacy are pronounced, and I came away from this project with a better understanding of the importance of being aware of the long-term effects of my work. Because I had to imagine the consequences of a post-privacy world, I realized the responsibility I carry, and I am a better designer for it.

In spring 2018, I participated in a research group with a small group of other HCDE students. We read the works of philosophers like Gilbert Simondon, Gilles Deleuze, and Bruno Latour, and studied problematic technology through the lens of speculative design. Speculative design aims to challenge the assumptions we have about the traditionally designed objects in our lives, and in the last few weeks of the research group, we were each challenged to create our own speculative design products.

A discussion about the lack of privacy in the digital age inspired me to create Off the Grid. I imagined a near-future scenario in which society has forfeited its privacy for the convenience of technology – something that is already in motion. However, a small group of people decide they do not want to give up their privacy, so they use Off the Grid to erase their entire digital footprint.

I began with sketches of my initial concept, which was a mobile application that would delete a person's digital footprint, from data on their device, to all their online accounts, browser data, and more. 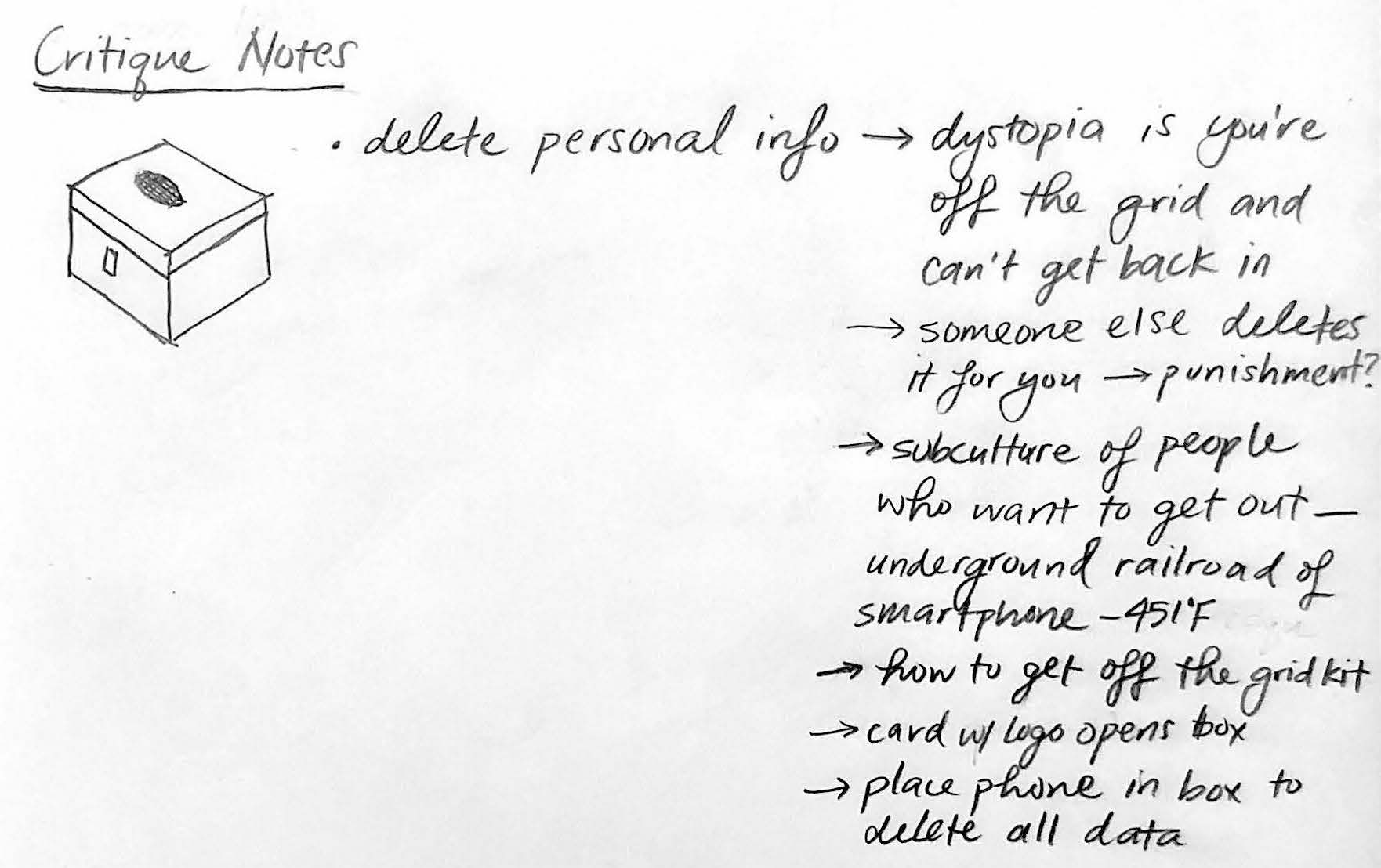 During a critique, I was encouraged to push the concept further and be more speculative. I realized that I needed to define not just the product, but also the world it would live in.

I then expanded my concept to fit into a near-future world where privacy is truly nonexistent. In this world, forfeiting privacy for convenience is the norm, and the few people who want to unplug are rebels – outcasts who are disconnected from society, both digitally and metaphorically. Off the Grid became not just an app, but rather a kit that guides people through the process of unplugging.

Once I had defined the world of Off the Grid, I had to reconsider the product itself as well. An app would not fit into the world, as this object would have to be passed around to bring new people into the subculture of disconnecting. I considered a box as the form factor for the kit, but I quickly realized that since this kit would be contraband, it had to be as discrete as possible. So, I chose an old, worn book.

Having accepted the risk of being cliché, I chose an old, worn out copy of 1984 because it fit the project so well. As with my product, the story deals with a complete lack of privacy, albeit in a much more sinister way. Nonetheless, 1984 serves as a cautionary tale of a true worst-case scenario if we do not tread carefully in the realm of personal data.

Off the Grid opens with a manifesto describing the state of privacy in the digital age. It goes on to list the consequences of forfeiting our privacy to corporations and ends with a call to action — to unplug. 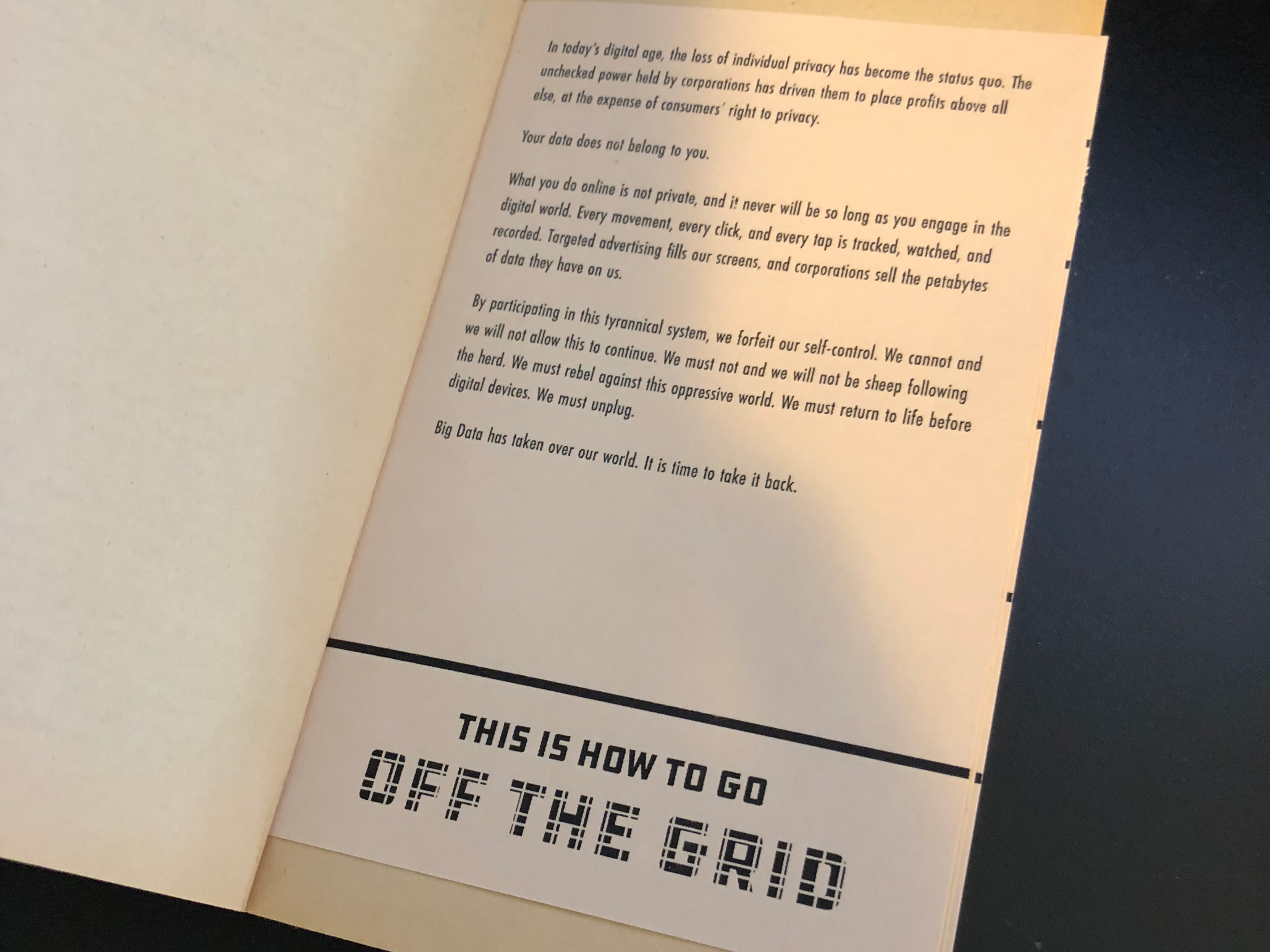 Inspired by brutalism, the visual design of Off the Grid is centered on sharp edges, thick lines, and tight, condensed type to create a sense of tension and discomfort. This visual style reflects the harsh reality of what happens when you unplug. 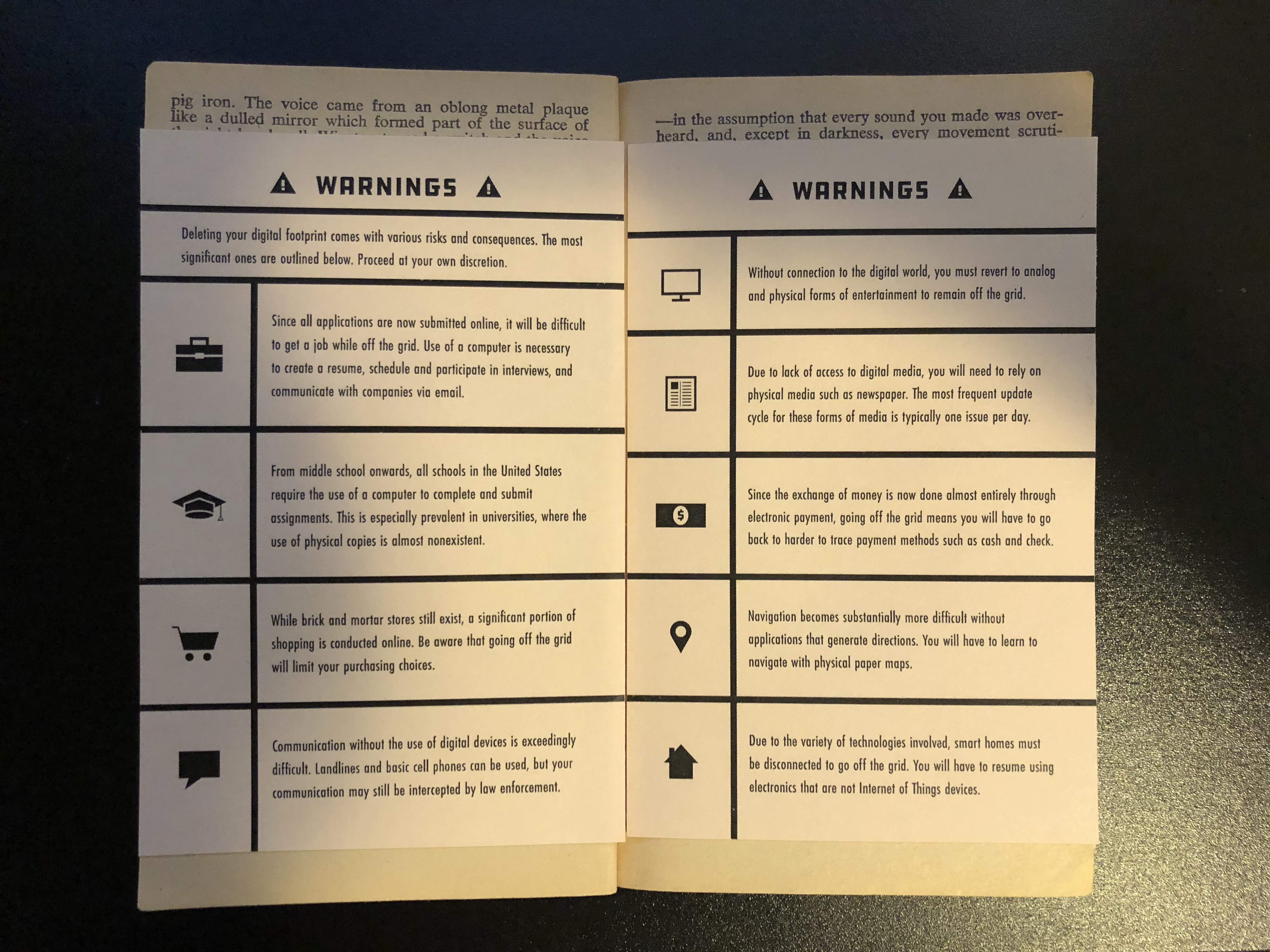 On the page where the user inserts their phone, a line appears below their device in all caps. In 1984, the quote "IGNORANCE IS STRENGTH" is propaganda, discouraging the citizens of Oceania from seeking knowledge. In my fictional world, the quote is flipped on its head to mean that sacrificing knowledge by disconnecting gives people strength. 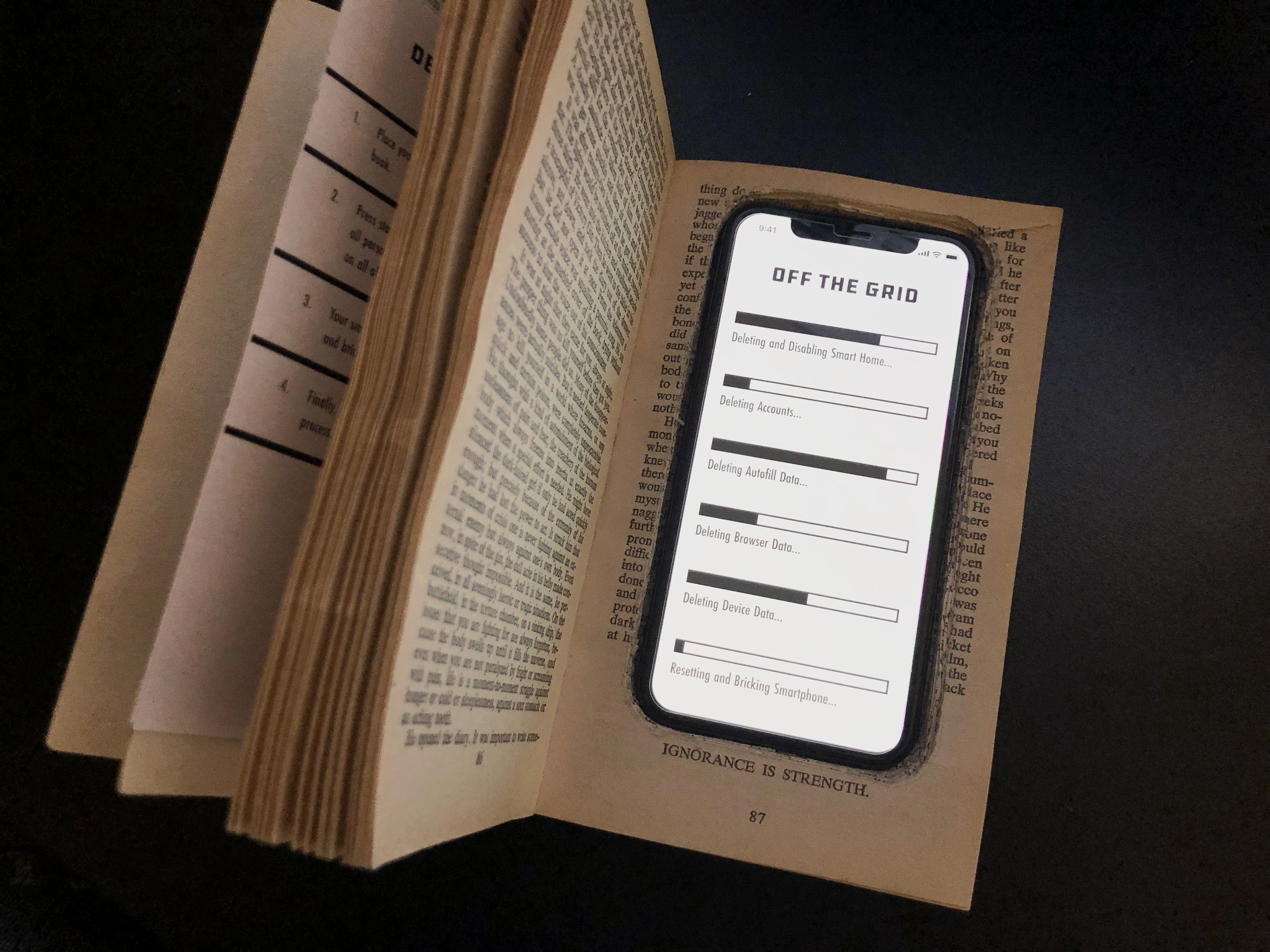